If you're looking for my old Astro Journal with my Equipment and Astro Automation pages: https://SaltwaterWitch.com/astronomy

Here's another shot from last night's imaging with the William Optics SpaceCat51 Apo Refractor and ZWO 071MC cooled camera, a wide-field shot with all three primary stars in Orion's Belt or the Three Sisters, Alnitak, Alnilam and Mintaka. I say "primary" because Alnitak (bottom one in this rotation) is a triple-star system, Alnilam (in the middle) is a supergiant on it's own and is 375,000 times more luminous than our star, the Sun. Mintaka (top) is a double-star system and the two stars orbit each other every 5.7 days. So yeah, I'd like to see that up lose--two massive stars spinning around each other that quickly. Bottom right you can see the Horsehead Nebula (Barnard 33) and NGC 2024, the Flame Nebula to the left and a bit lower than the Horsehead with Alnitak between them. I used the Celestron UHC/LPR filter for these subs, and that's causing the halos around the brighter stars. I know the sticklers out there will think these are an abomination, but I'm okay with them, and I don't see halos as that much different from the diffraction spikes we get with our SCTs or Ritchey-Chrétiens. I mean the freakin' Hubble has diffraction spikes on the stars. I can deal with some haloing. 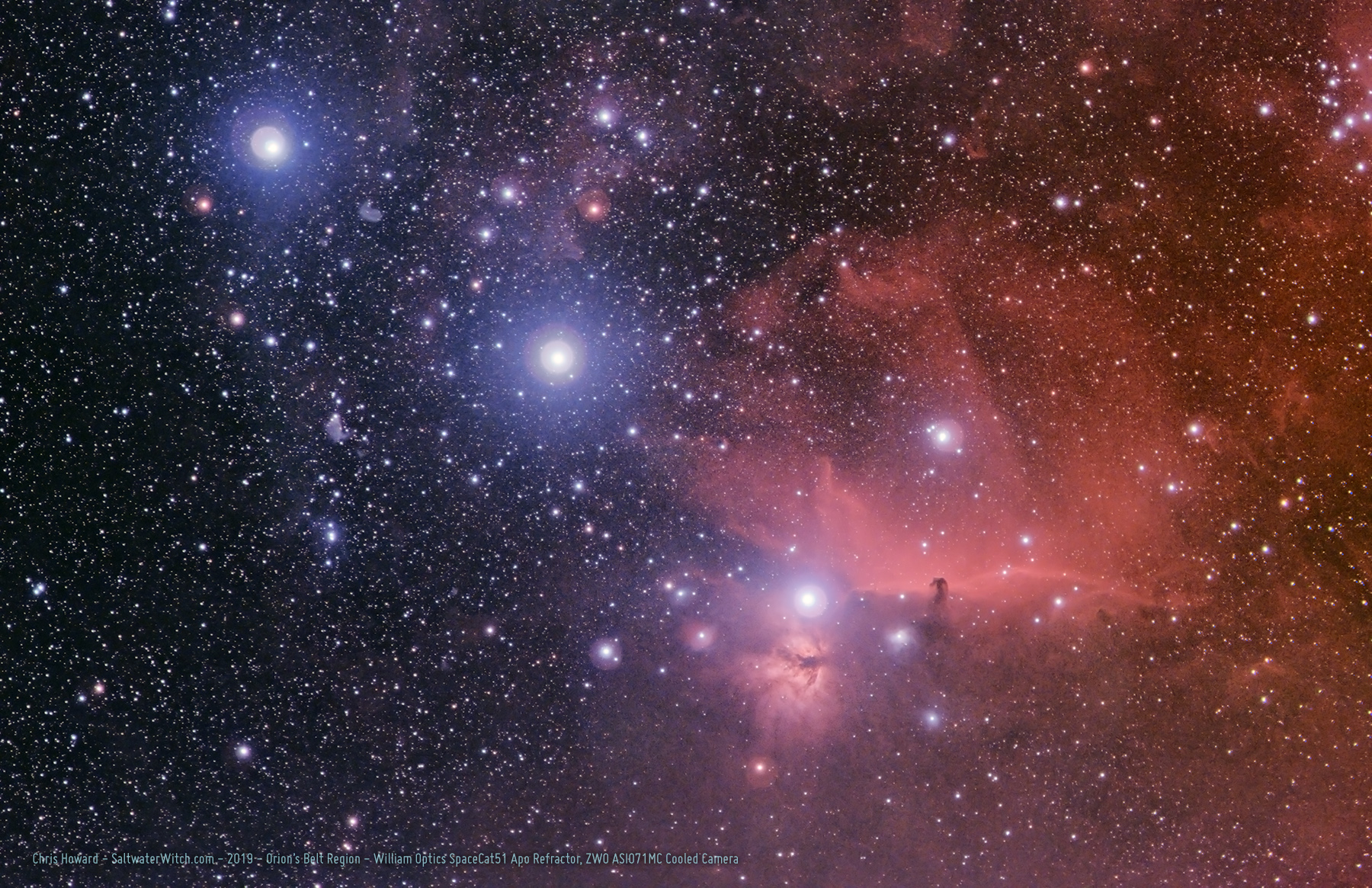 M33 Triangulum Galaxy with the William Optics SpaceCat and ZWO ASI071 Cooled Camera and a really old Celestron UHC/LPR filter with longpass bands at 450-550 and 600-700--not exactly the dual narrow band passes of a high-end color filter like the STC Astro Duo-NB, but the results are still pretty good. The filter does a decent job of bringing out the OIII and Ha color ranges, which would be washed out in the full mix of broadband with the IR/UV Cut filter (my normal broadband color config). M33 is about 2.7 million light-years away from us, and it's about 600,000 lightyears across, with 40 billion stars. With this bi-color filtered view the Triangulum shows off dozens of large HII regions at the red end of the spectrum--those are the red and pink masses distributed around the galaxy's spiral arms. My conclusion: you know there's some kick-ass deep sky astrophotography going on right now in any of the developed civilizations in M33. Not that we'll ever know for sure, you know, outside our light-cone and all that stuff. Well, not until we crack that thorny faster-than-light travel problem. 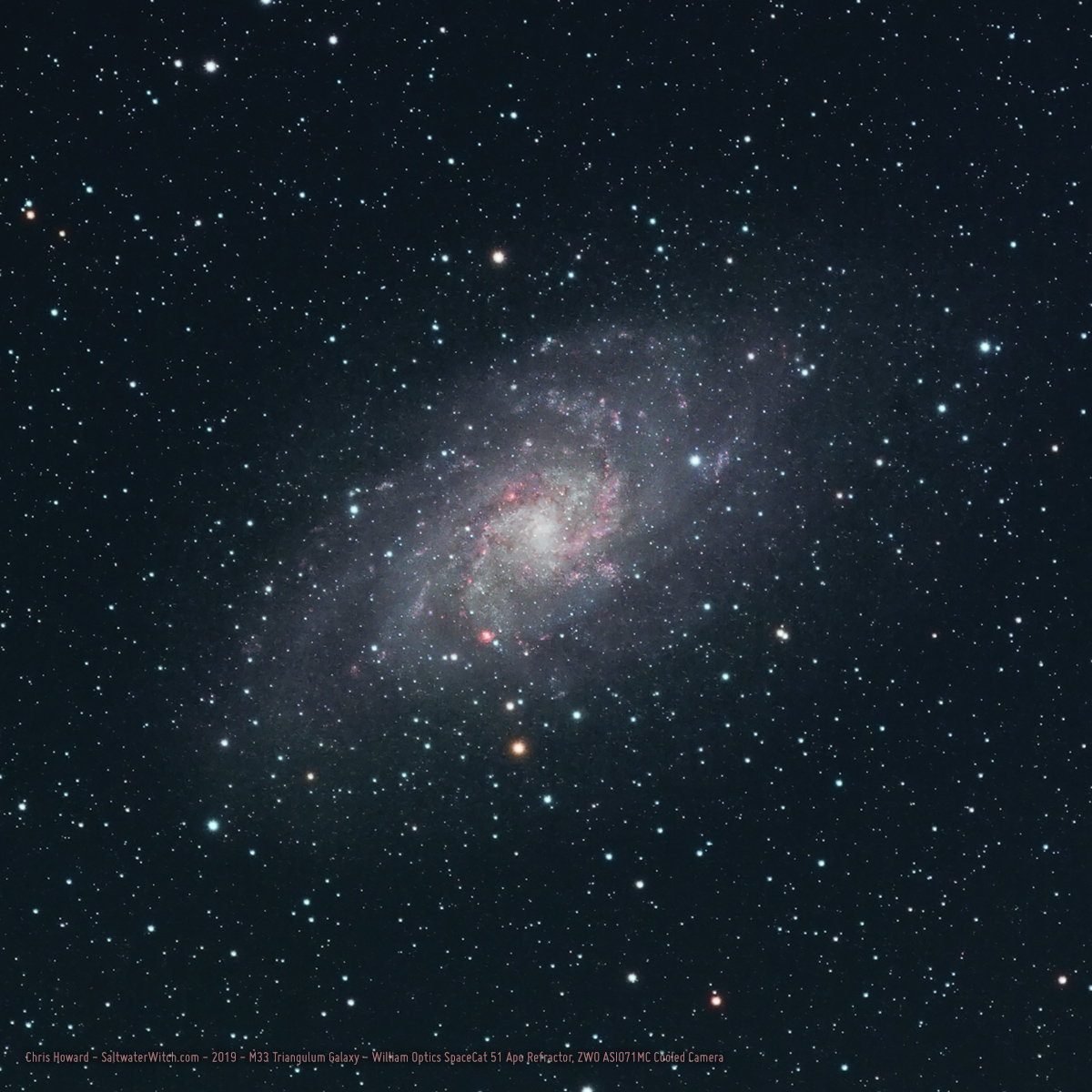 More Color with the Cat

This was an especially busy week at work, a lot going on all around, including my son with an especially bad cold that developed into pneumonia--he spent the week recovering, so it was nice to be able to relax on a Friday night with clear skies, and schedule a somewhat unplanned and wayward imaging run across the autumn night sky. Two of the targets I focused on were M45, the Pleiades, and the M78 reflection nebula in Orion. I was trying out 8-minute exposures with both of these, and they both turned out well. It's always nice to have an early setting moon--or new moon where I can use my ZWO ASI071MC cooled color camera with a normal UV/IR cut filter, and not have to plan around our star's light reflecting off our disproportionately large moon. I shot the following stacked and processed sub-exposures with the William Optics SpaceCat 51 APO Refractor, ZWO ASI071MC camera, on an iOptron CEM25P mount, with 28 x 480 and 600 second subs for M45, and 27 x 240 second subs for M78. 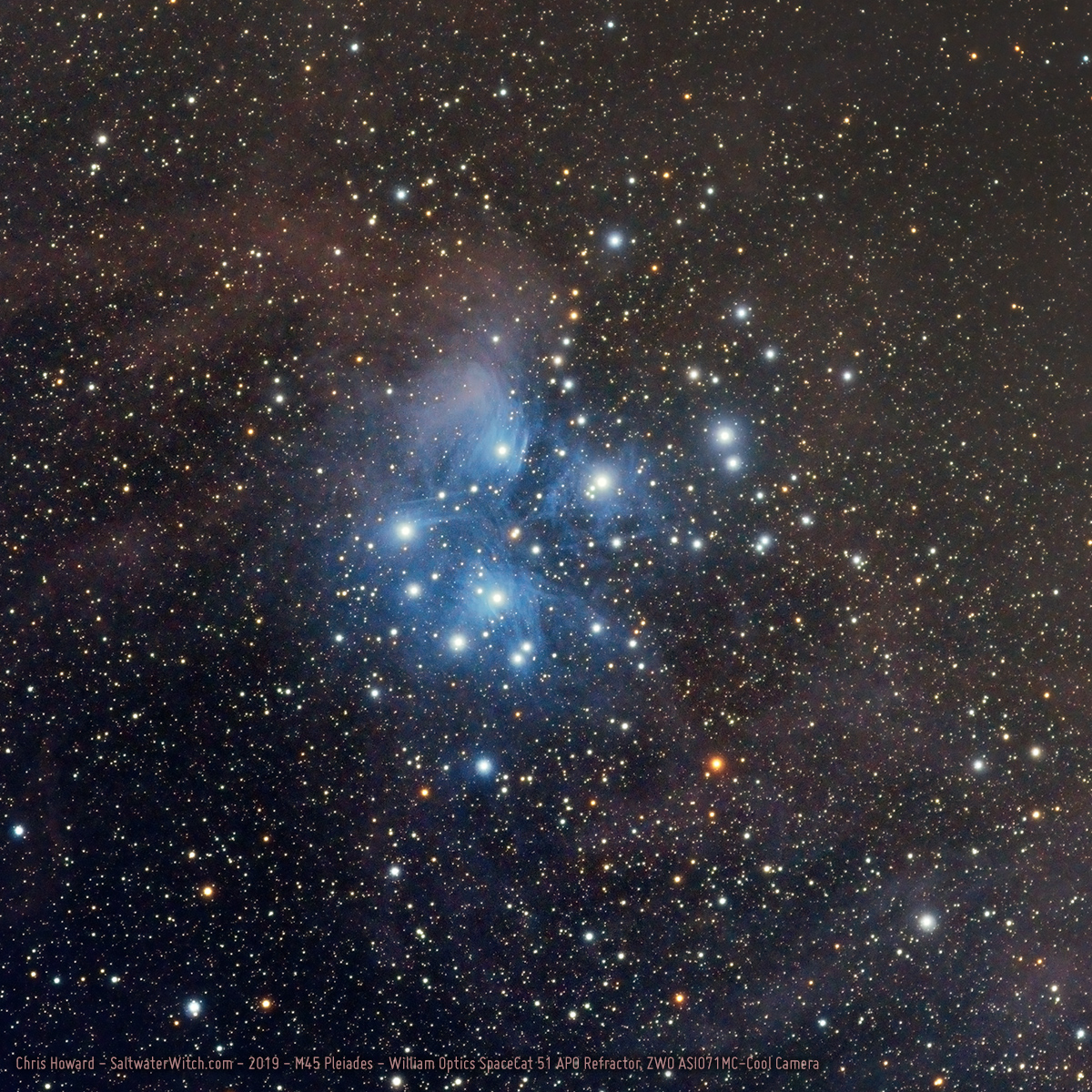 The constellation Orion holds a special place in my astronomy-shaped heart, from Barnard's Loop (Sh 2-276) to the Witch's Head (IC 2118) across from Rigel, to the pair of stars at Orion's shoulders, Betelgeuse and Bellatrix, and of course, M42 the Orion Nebula, which we really should continue to call the "Great Orion Nebula" because, well, it's great and arguably magnificent. Among all of Orion's well studied and photographed nebulae is another favorite, the mysterious Messier 78 (M78), an almost violently colored and shaped reflection nebula coiled in dark clouds of interstellar dust that makes it look like it's poised to attack Barnard's Loop. (What is "astronomy-shaped" you ask? Probably something like a refractor telescope shape, or possibly like the stacks of money I have spent on telescopes, cameras, mounts, and other equipment). 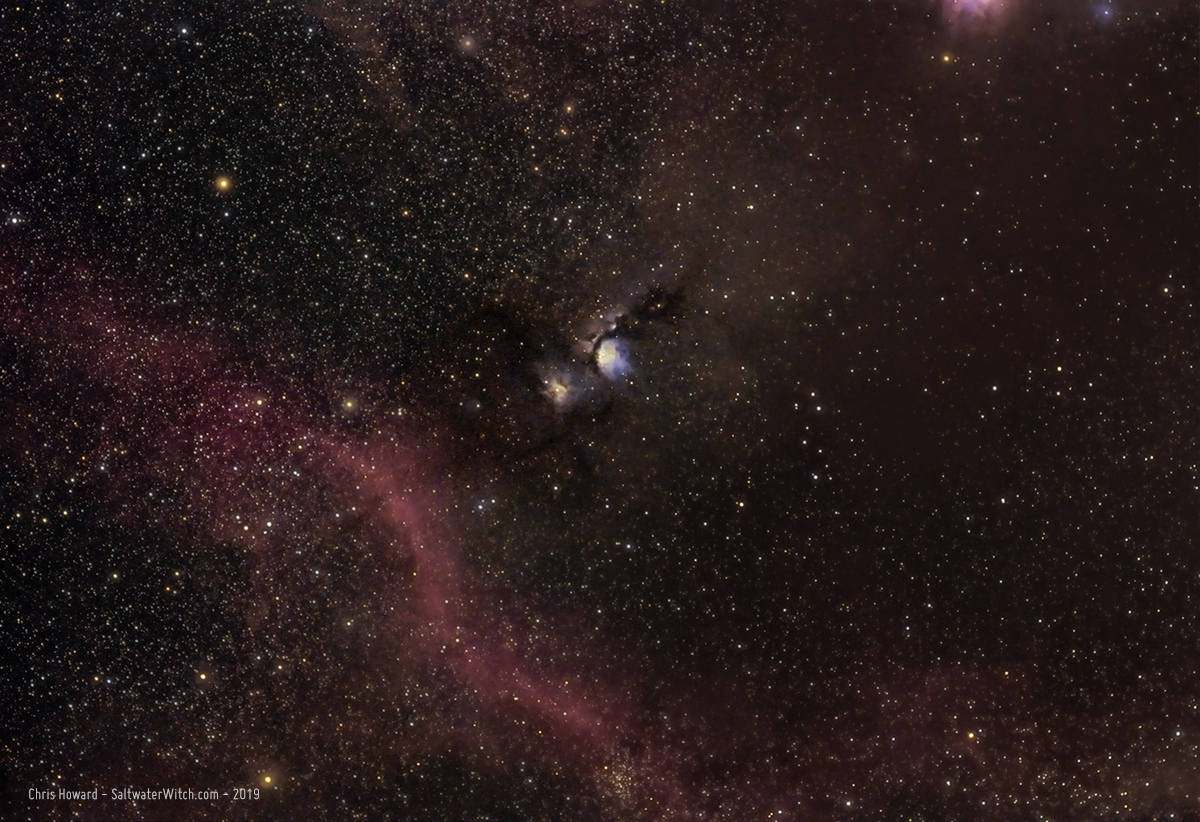 I'm working on a motorized focuser for the SpaceCat / RedCat. I saw that K-Astec is using a timing belt flipped inside out--brilliant. I've also seen DeepSkyDad's version, with the 3D-printed gear ring--very cool. I just ordered a couple test belts with a 2.5 mm pitch to see if that will work with the Cat's focus ring.

UPDATE: I was just emailing with Pavle at DeepSkyDad.com, and I ordered their latest AF3s motor/controller combination with the Cat timing belt ring, belt, custom pulley and L bracket. After a few days trying to get the 2.5mm pitch timing belt to work with the Cat's focus ring--with a lot of slipping and different configurations, different step sizes, speeds, etc., I went ahead and got the DSD working set. I'm pretty sure part of the problem is the softness of the Cat's focus ring, so that even with a timing belt with matching pitch it wasn't going to behave like a pulley, just not rigid enough--made for human hands to grip and adjust. I was going to have to go with supplemental gearing, either a reversed timing belt glued-down like K-Astec, or with the 3D printed rigid ring developed by Pavle. https://deepskydad.com/autofocuser/redcat. I went with the standard enclosure instead of the RedCat mount so this should work well with the camera rail. 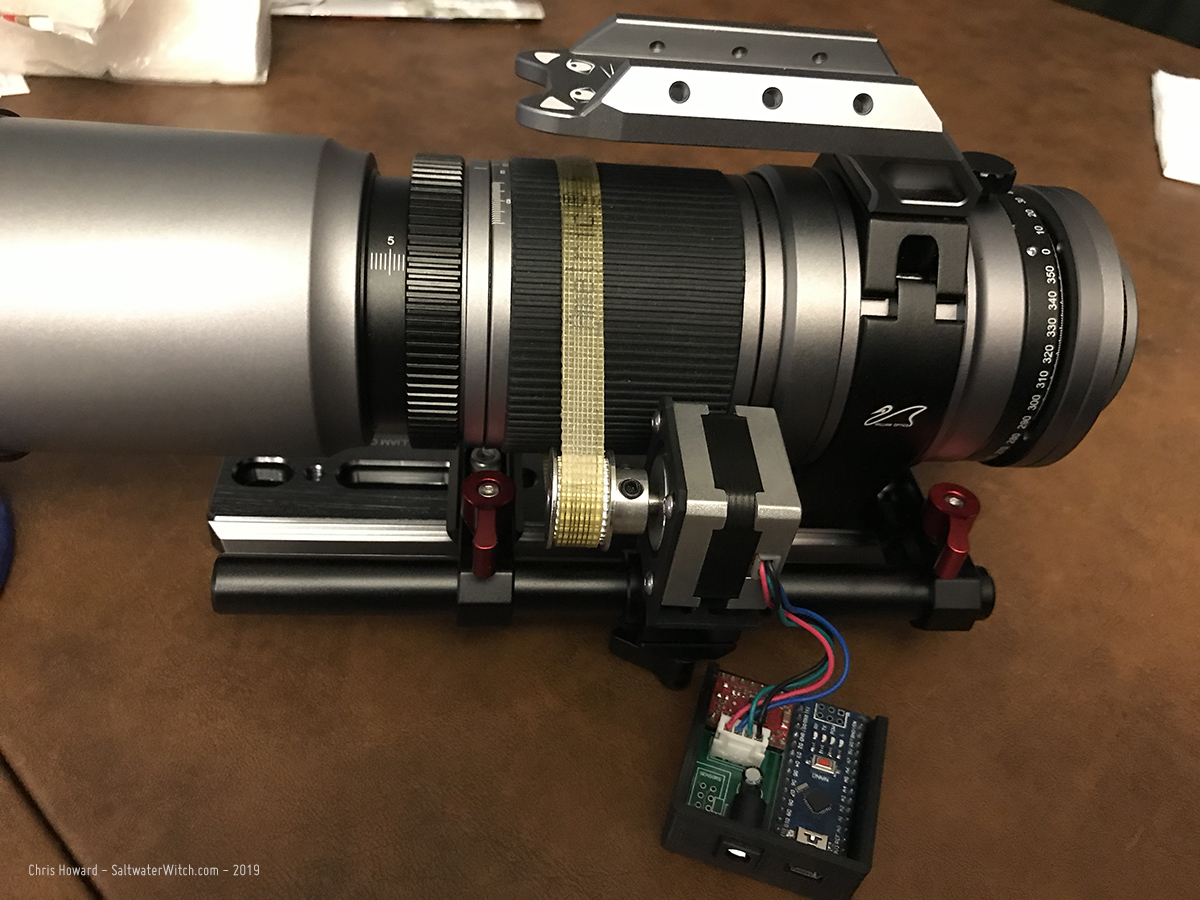 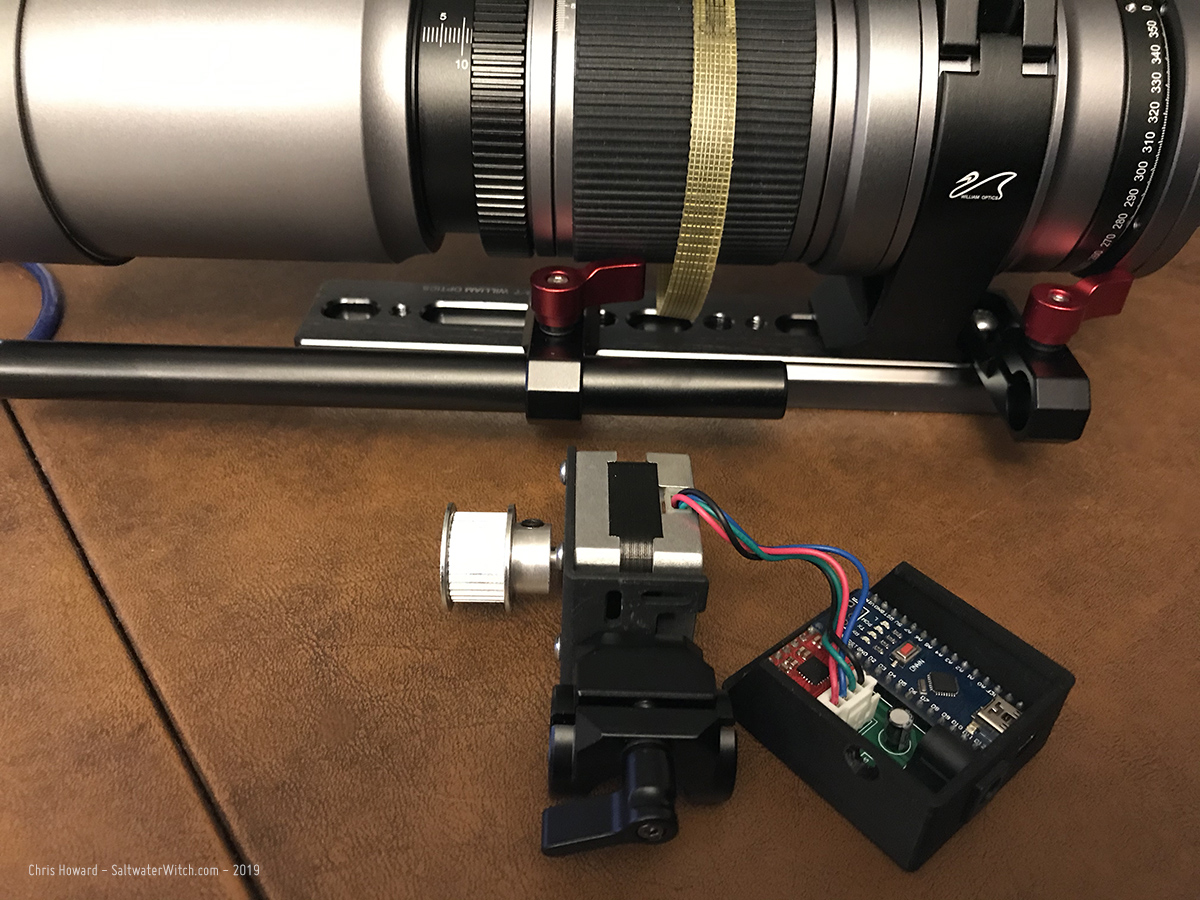 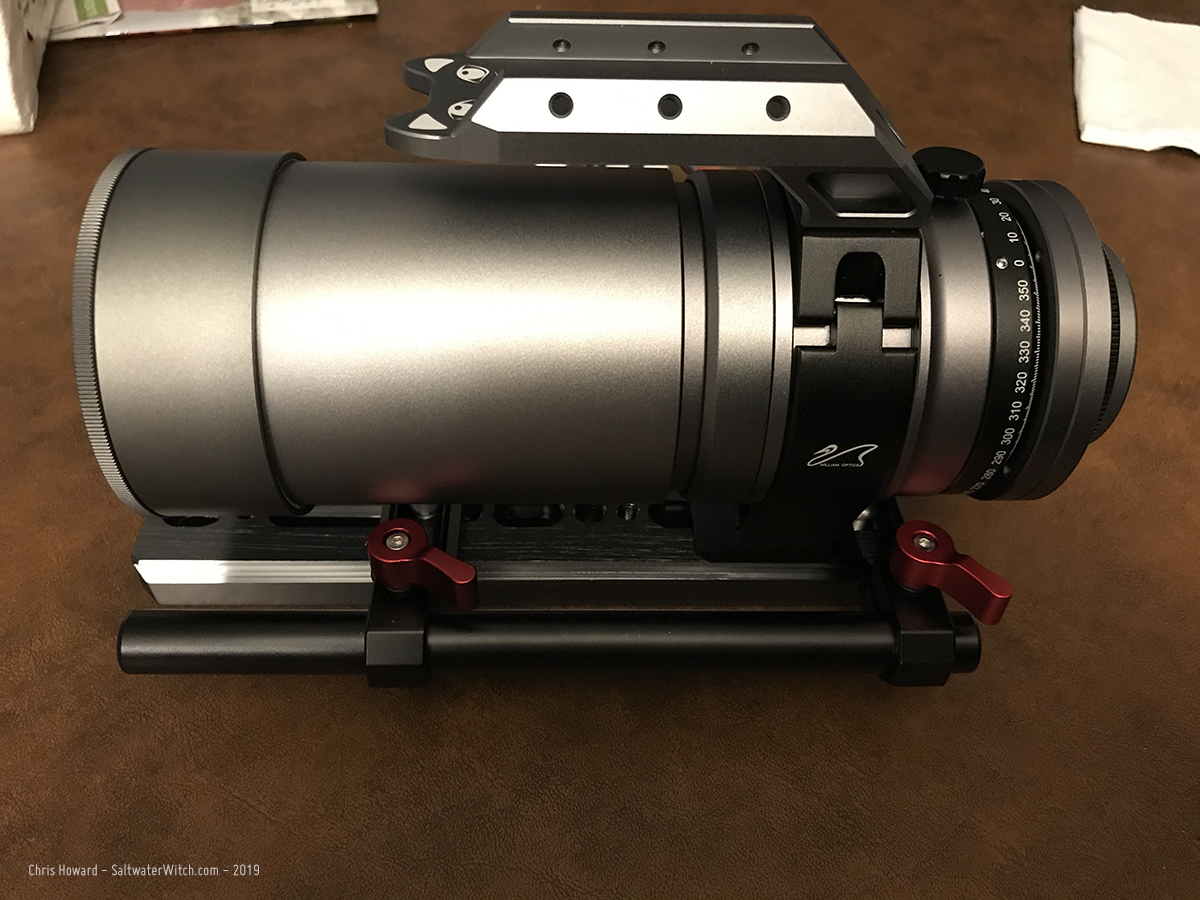 With clouds overhead I'm working on a motorized focuser project for the William Optics SpaceCat 51 APO refractor. For a prototype I'm going the Moonlite Focuser protocol, using João Brázio's Ardufocus (https://ardufocus.com) with an Arduino Nano microcontroller + A4988 stepper driver. For tests I'm using a NEMA 11 stepper with 1:100 ratio planetary gearbox. I am a fan of DeepSkyDad's products (I have an AF1) and I like his approach for using a custom 3D printed ring for the belt drive with his RedCat Autofocuser. I'm also a fan of K-Astec in Japan, and their approach uses a standard GT2 belt flipped inside out. Fantastic idea.

I have a batch of timing belts, and the best fit I have is a 2.5 mm Pitch (T2.5 Tooth Profile, 290 mm length, 10 mm width) you see in the pics. It's not perfect, and I'm waiting on the right sized pulley--so we'll see if this works. 3mm pitch might work better. Or I might have to go with DSD's approach and print a ring with matching timing belt pitch and teeth.

Some shots of the FocusCat project in progress: 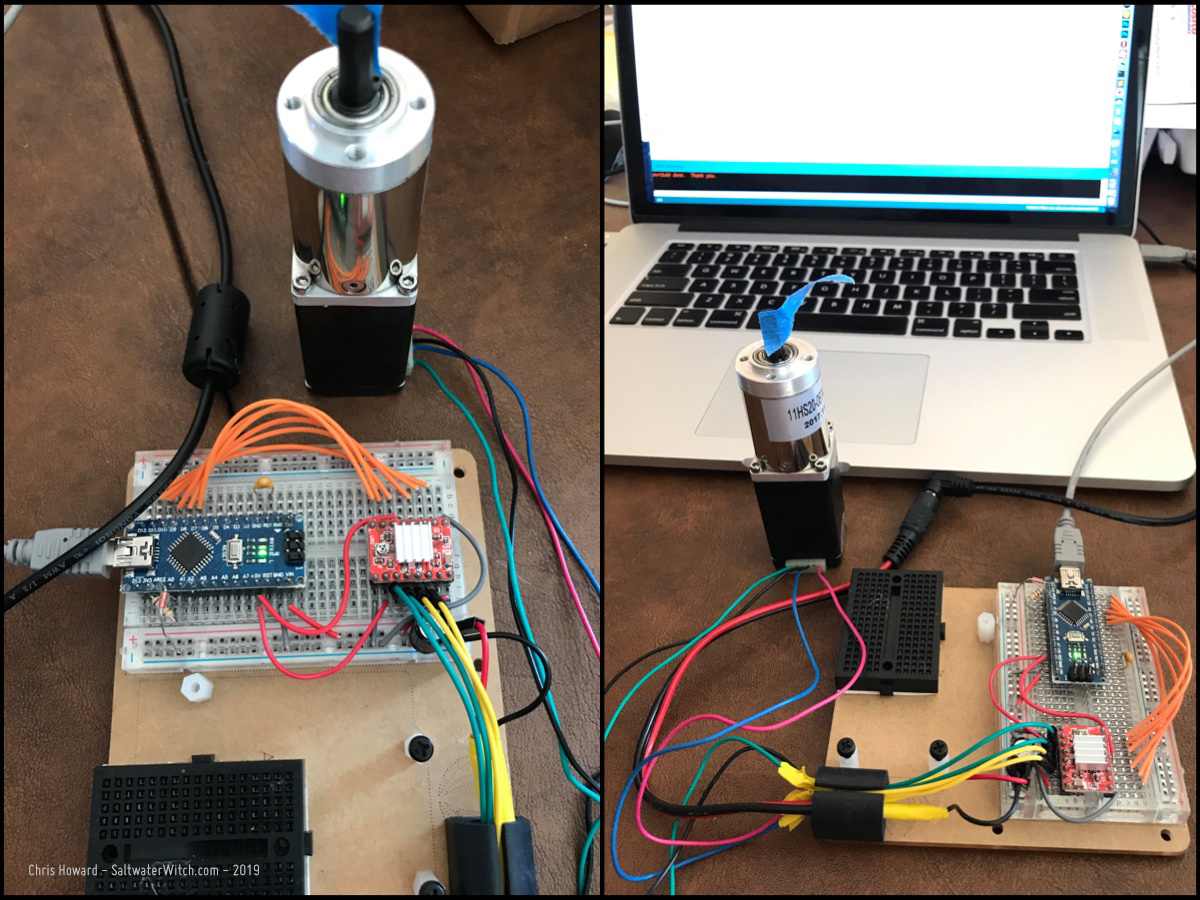 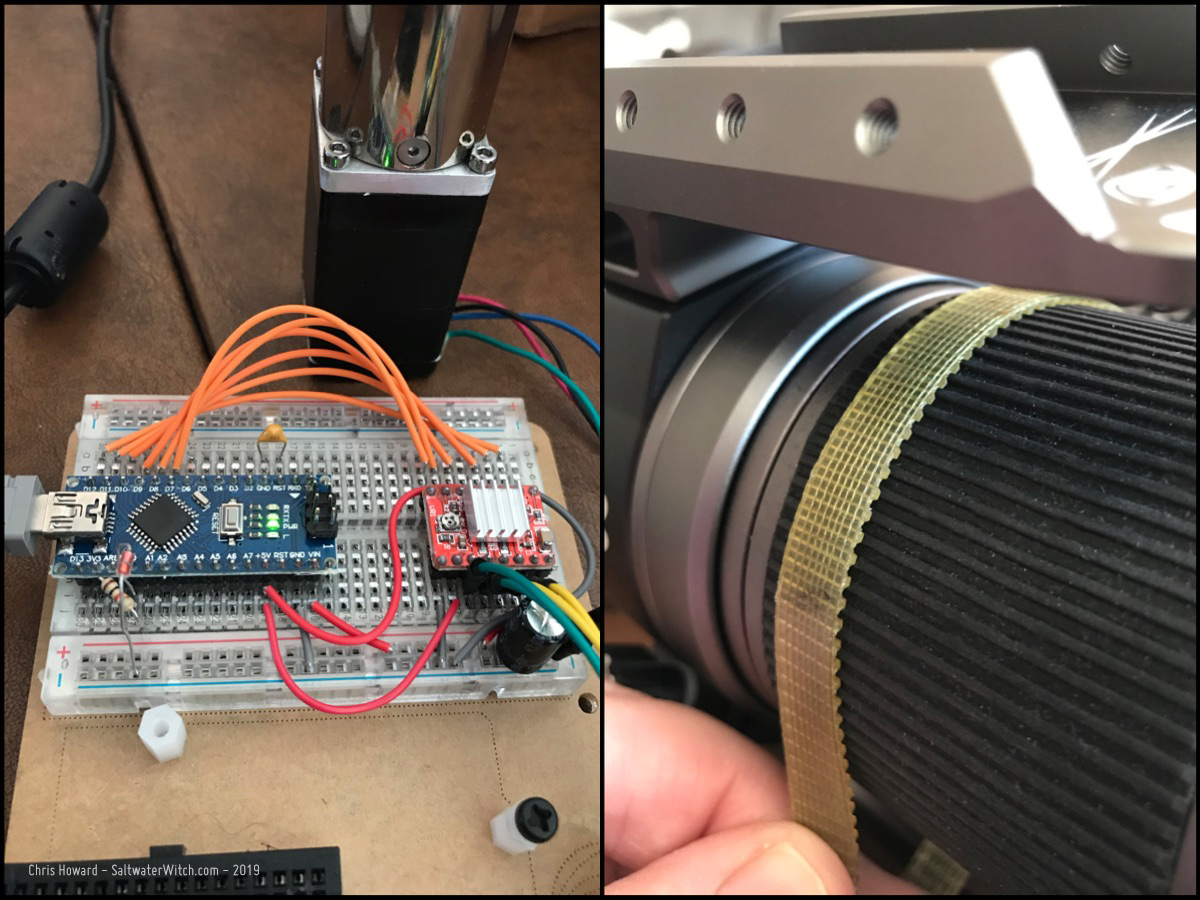 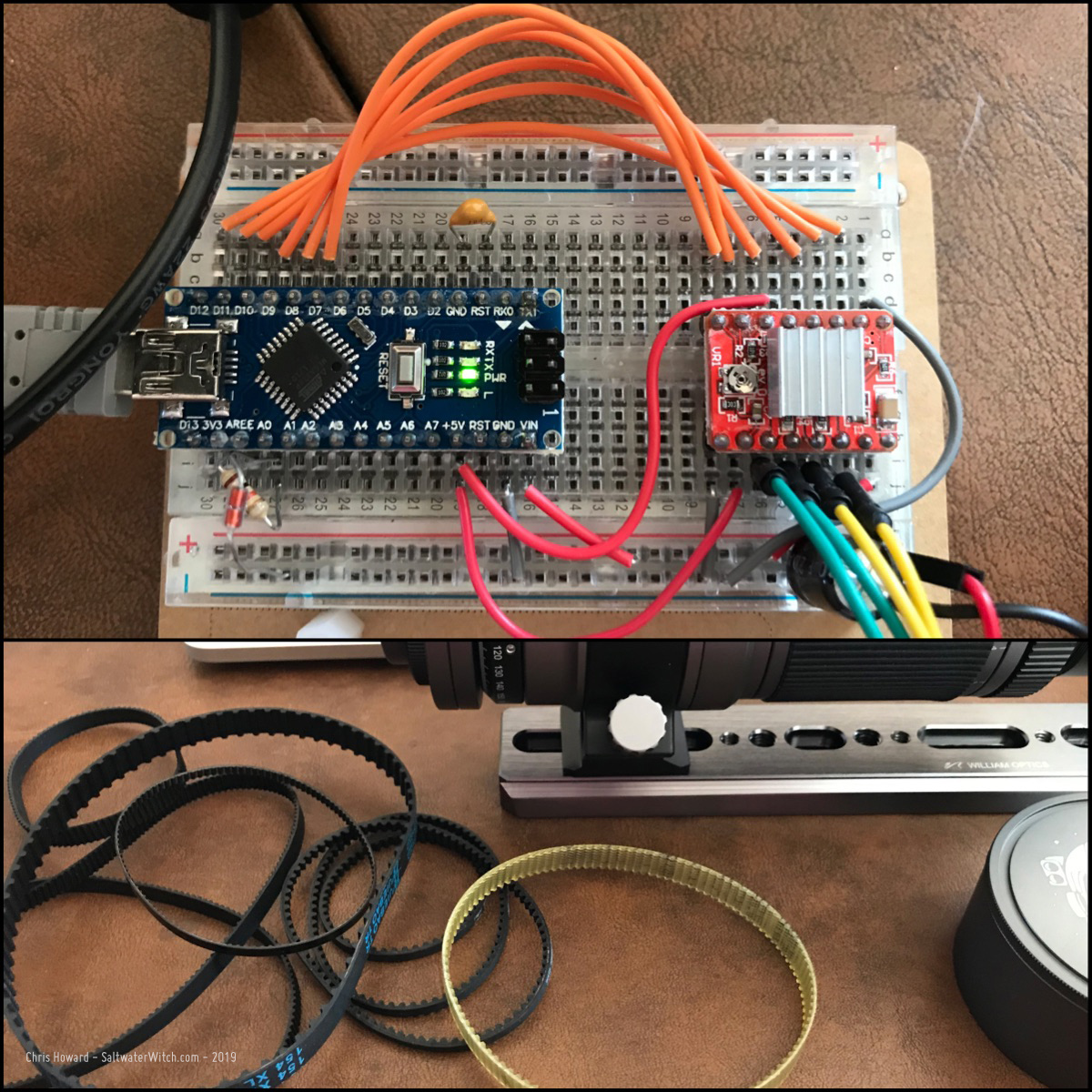 Color with the Cat

I set up the William Optics SpaceCat 51 with my color imaging train--ZWO ASI071MC, OAG, QHY guide cam--to test out focusing and test sequences in SGP, running through M31, M33, and M45 before the moon rose and washed out the sky.  Seeing was not that great last night, but it was clear enough for testing. The Cat51 is such an easy scope to work with. I used the Frame and Focus panel in Sequence Generator Pro, and in a couple minutes had really sharp stars with a dialed in HFR. I went through the next five hours of imaging without adjusting focus. 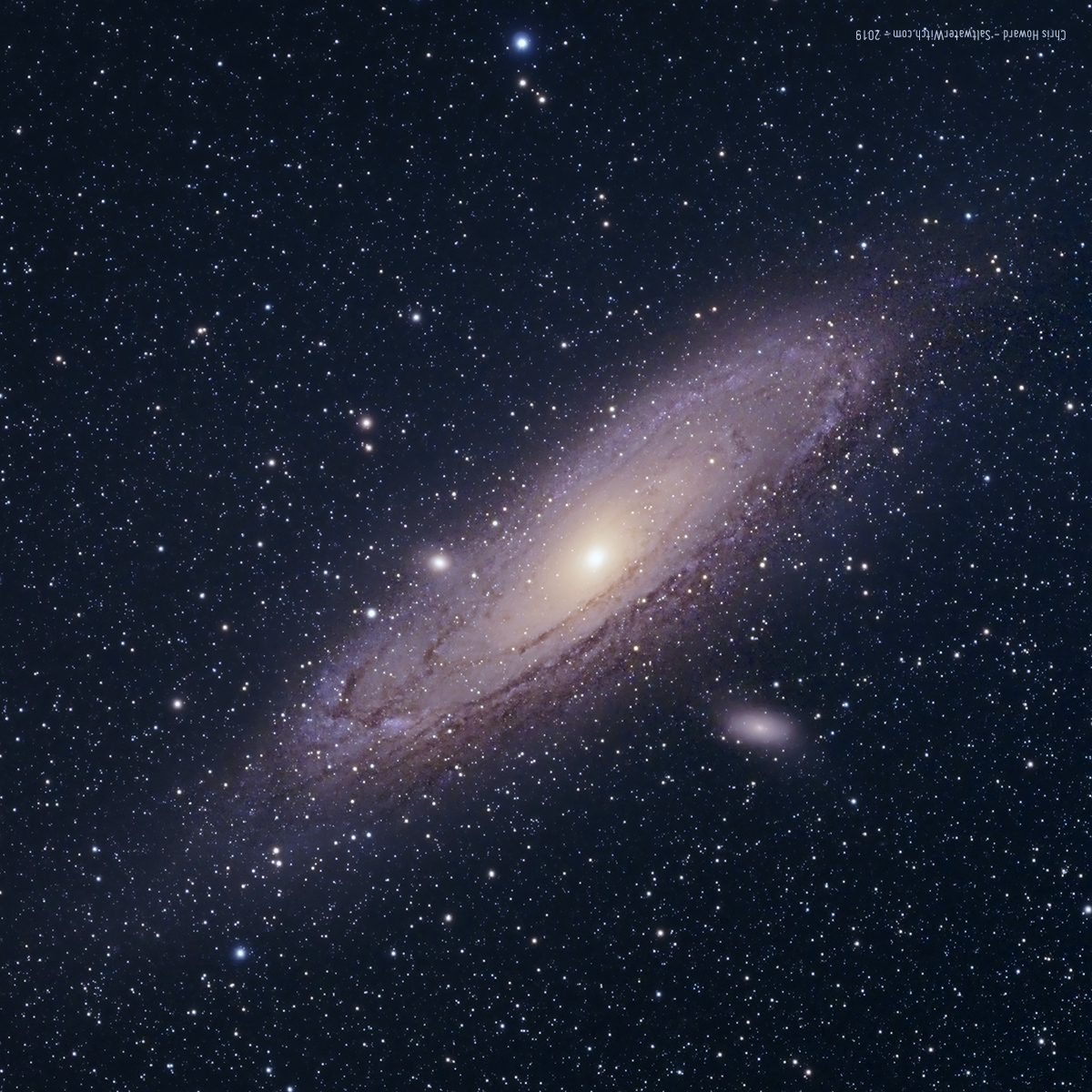 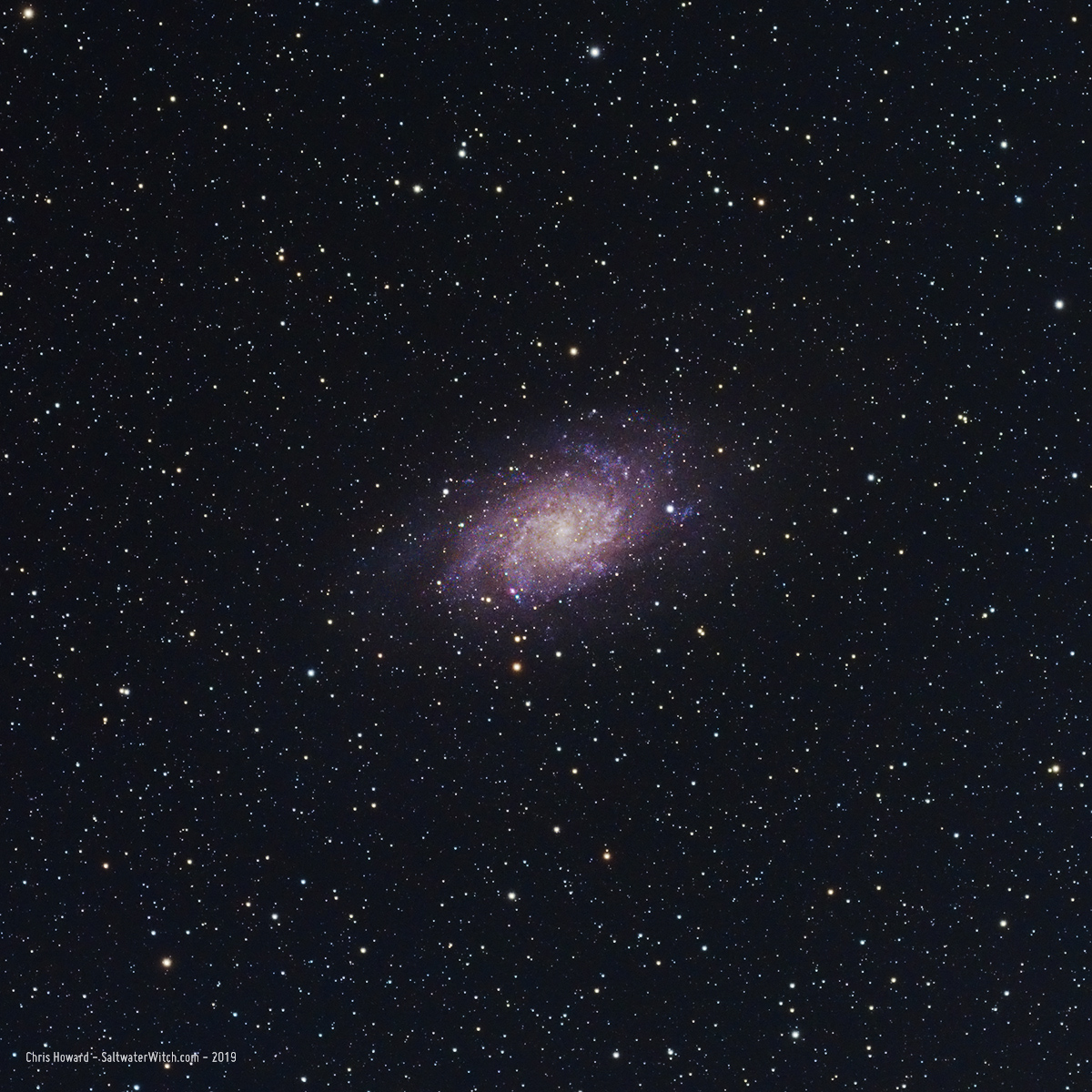 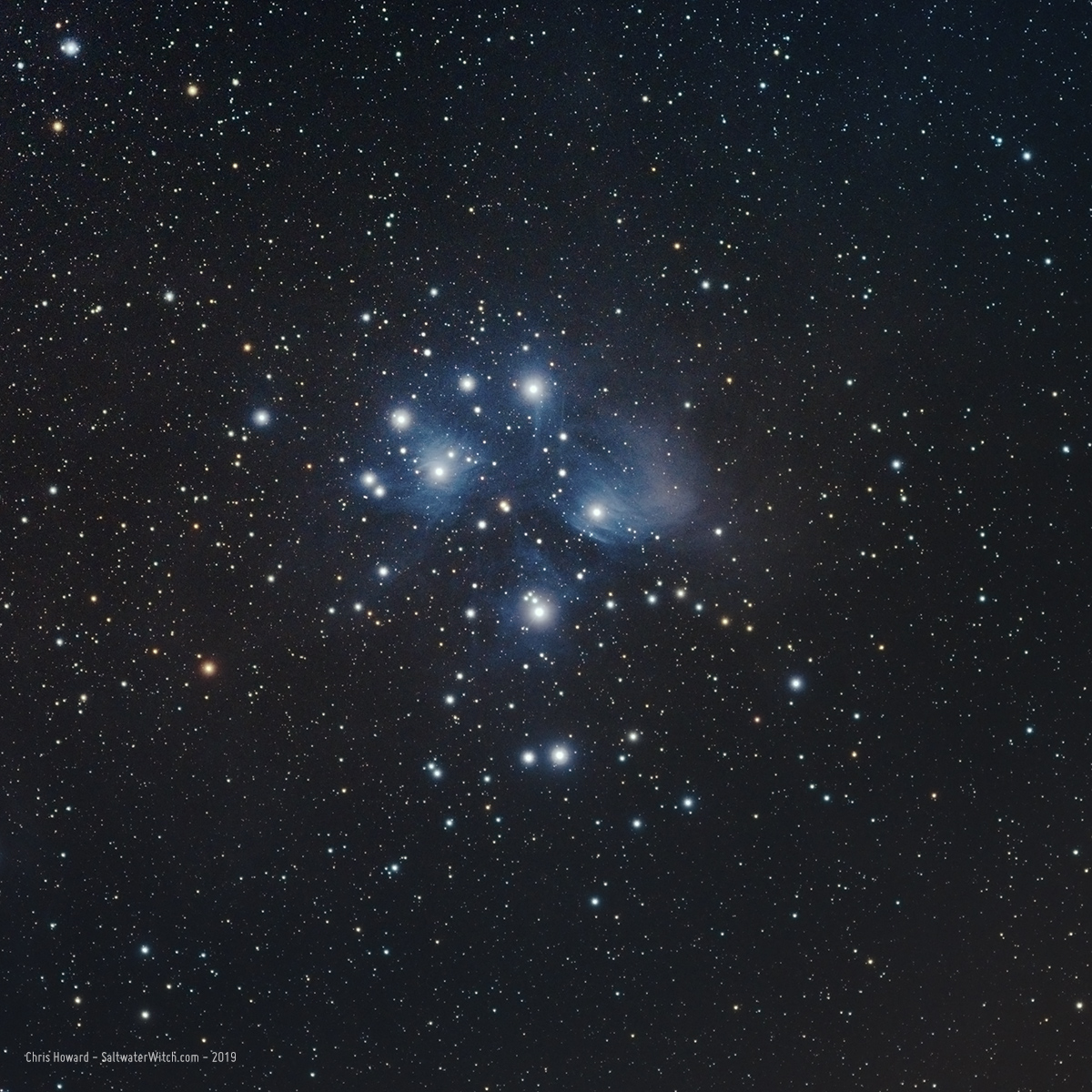 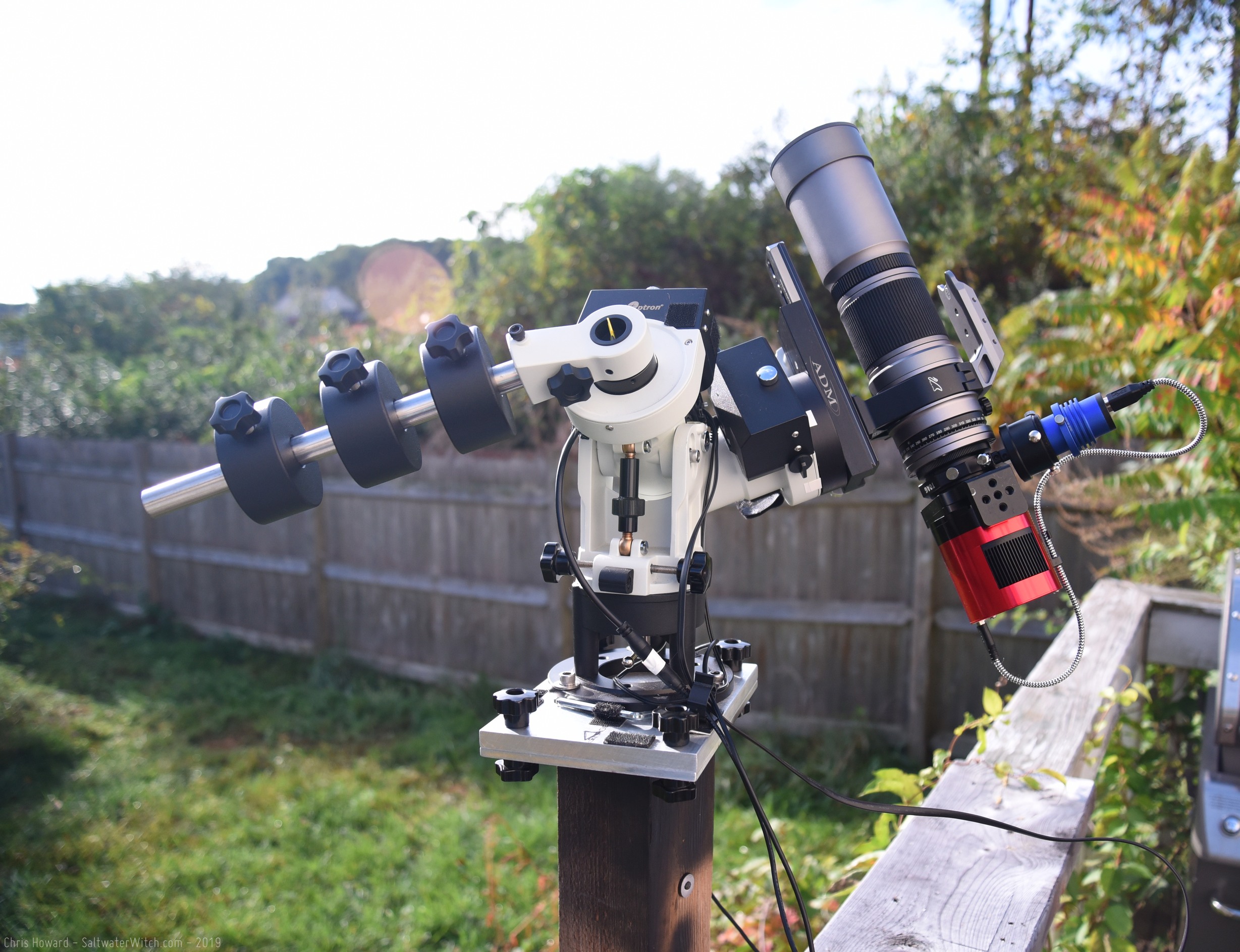 We finally had a clear night. The only problem was the moon rising around 8:30 pm. I still had an hour of darkness before that, and used it to run some tests with my new William Optics SpaceCat 51 APO Refractor (250mm FL, f/4.9). I was already impressed by the build quality and design characteristics of this extremely portable, wide-field scope. The edge-to-edge sharpness of the images I shot during some daylight testing astounded me. So I was not surprised that my first shots of nebulae with this small but versatile refractor were beautiful. William Yang and the team at William Optics continue to innovate, creating new and more capable telescopes, while advancing and adapting their existing product lines for new and more demanding uses (Have you seen the new Fluorostar 156? Holy Zeus doing jumping-jacks, that's a beautiful refractor). The SpaceCat 51 (the limited edition space grey version of the RedCat 51) is my third William Optics scope--I started with a GT81, and I'm certain there will be more as time goes by.

Here's a stack of 10 subs of NGC 7000, North America Nebula in Cygnus, with a bit of the surrounding region including the Pelican Nebula. This is 10 x 240 second exposures stacked in DSS--no calibration frames, shot with a William Optics SpaceCat 51, ZWO ASI1600MM-Pro mono camera, and Astronomik 6nm Hydrogen-alpha filter. I'm using an Orion Thin Off-axis Guider and ZWO ASI120M-mini with this train, and guiding was spectacular. I didn't crop or do anything crazy with this stack, just normal processing in Photoshop CC 2019.

NGC 7000 (North America Nebula), IC 5070 (Pelican Nebula) and IC 5068 (lower right) are all part of the same HII region in the constellation Cygnus. NGC 7000 is about 1800 lightyears away in the Orion Arm of our the Milky Way. With this field of view, we can see over 140 trillion miles of clouds of interstellar ionized hydrogen, lit by the massive binary star HD 199579, located approximately where Chicago would be. The dark bands and filaments of dust in front of these vast glowing clouds (LDN 935, B 352, 356) help form the eponymous North America shape, blocking out a large region for the "Gulf of Mexico", running up the "East Coast" and across the "Northeast Passage". 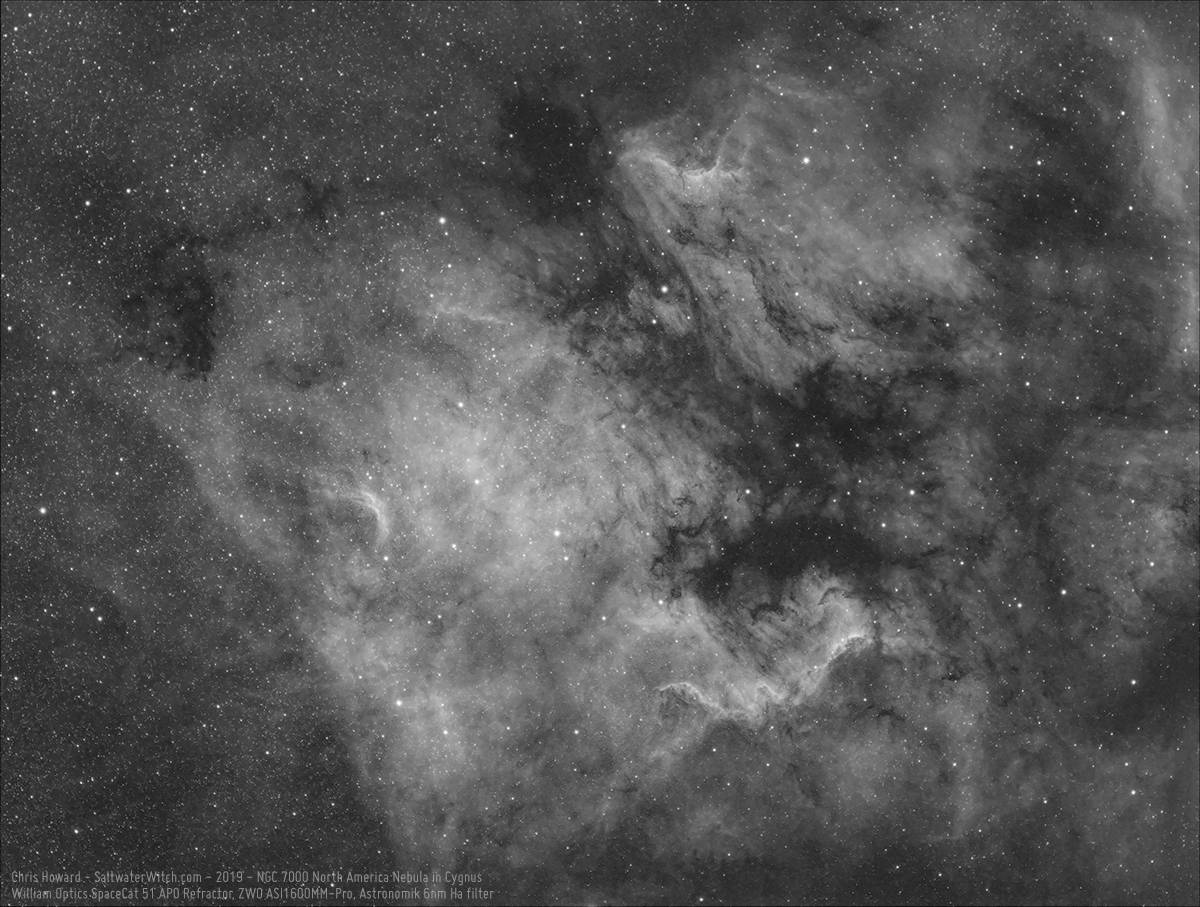 Not the best night for astrophotography...

I took a 1-sec exposure of the William Optics SpaceCat 51 during some narrowband subs. There's a beautiful moon out there, but that's not great for taking shots of deep sky objects. 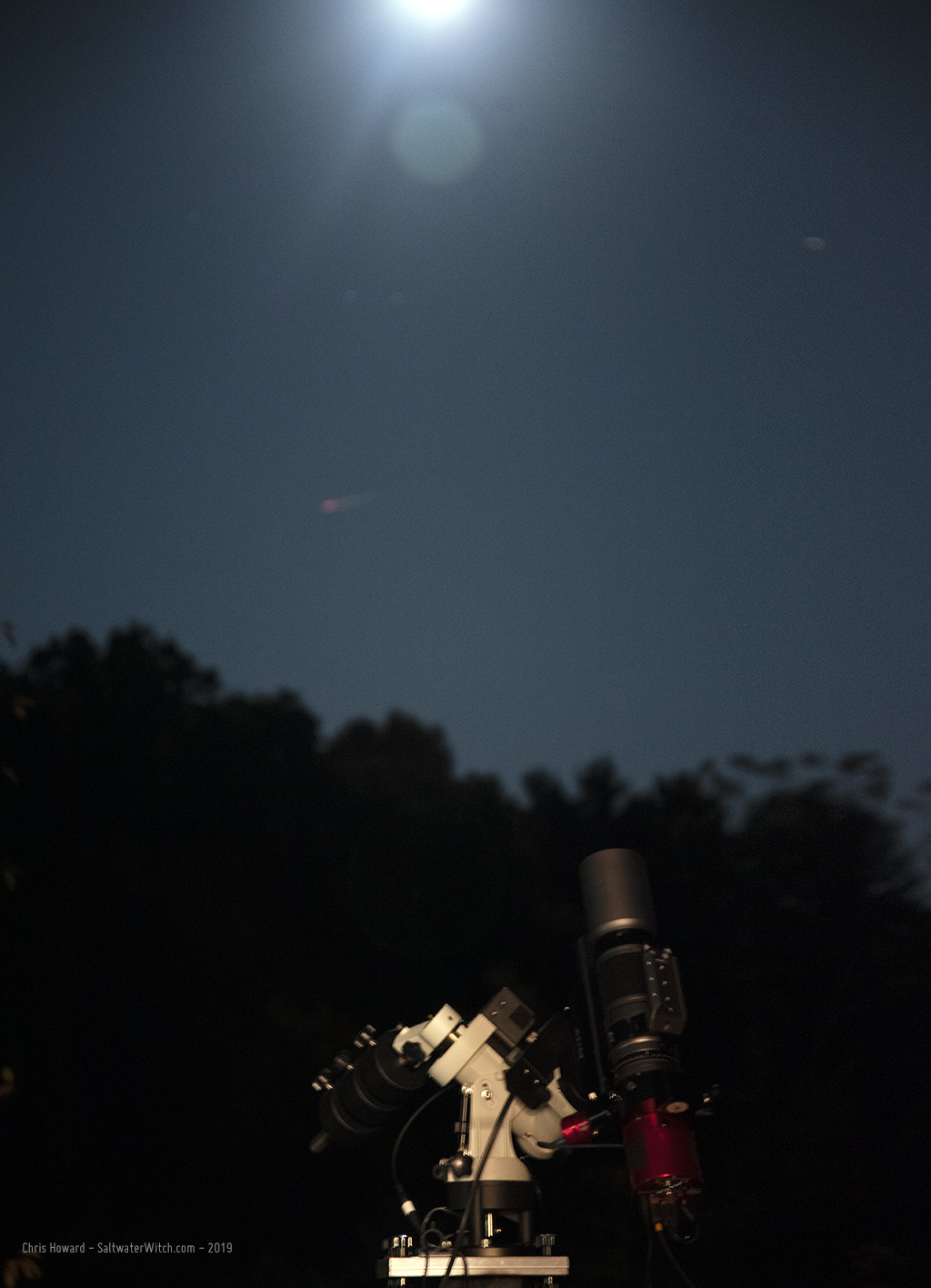